Does Vaping Cause Popcorn Lung? 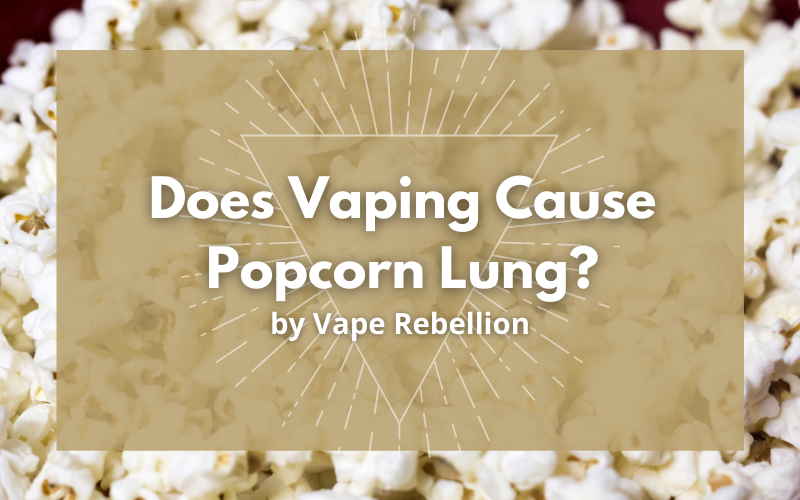 Popcorn Lung has been a long debated subject in the world of vaping ever since the release of a study done by Harvard.

What is Popcorn Lung?

Bronchiolitis Obliterans, commonly known as Popcorn Lung, is a pulmonary disease that results in the obstruction of the airways of the lungs from inflammation.

There is currently no concrete or proven cause of Popcorn Lung, but it is believed that it is likely caused by chemicals such as formaldehyde, ammonia, chlorine, and of course diacetyl.

The story had arisen from a case study of Popcorn Lung contracted by workers of a popcorn factory – diacetyl was used in the buttering agent produced and mixed in the factory, and thus diacetyl was linked to the disease, but was inconclusive. The study published by the CDC stated that out of the 425 workers, only eight had been diagnosed with the disease, and out of the 8 infected workers, only half had worked in the mixing department.

How is this linked to vaping?

It’s commonly and falsely believed that electronic cigarettes and vaping in general is the cause of Popcorn Lung. This is because of the presence of diacetyl in early vaping liquids.

The misconception here is that vaping has exposed the public to this brand new chemical danger. This is actually not true, as humans have been exposed to diacetyl for years prior to the release of e-cigs. What the Hardvard studies don’t tell you is that tobacco cigarettes expose smokers to 750x the amount of diacetyl that any vaper is exposed to. This is even taking into consideration the e-liquid with the highest concentration of diacetyl, and even in that case it is only a trace amount.

The reality is that there have been no smokers (nor vapers) diagnosed with Popcorn Lung.

The Harvard study was not analyzed properly, and was blown up by the media with gross misinformation as a result. There is a wealth of information on the internet that debunks the myths.

Switching from cigarettes to vaping is the healthier and safer alternative, and should be seriously considered by anyone smoking cigarettes.