Is Vaping Safer Than Smoking? 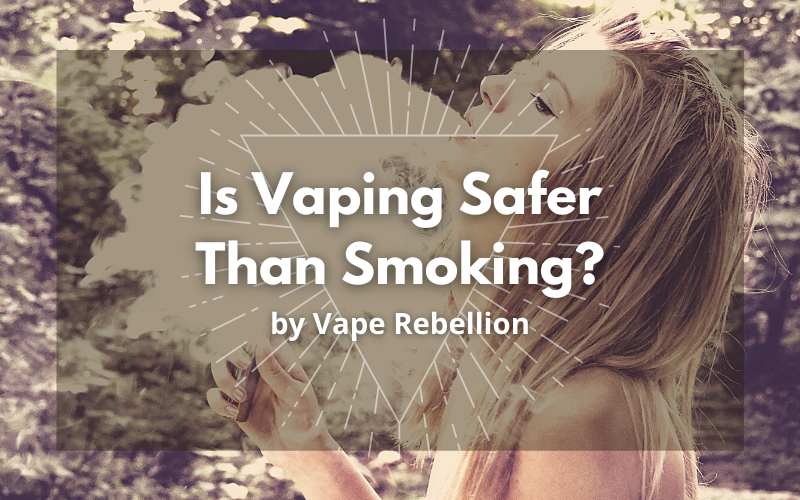 As many already know, vaping is an extremely effective way to stop smoking cigarettes and is a far less harmful alternative. One of Vape Rebellion’s main goals is to help more smokers switch to vaping so that they can take a crucial step to improving their health, as well as the health of those around them. Unfortunately, a lot of smokers are skeptical because of a lot of the misinformation that gets spread around about vaping.

That’s why it’s up to you and me to convince them that vaping is the way to go! Share this post with your friends and family members who smoke. We’ve included a section at the bottom with some advice on starting out.

The main reason why vaping is much safer and healthier than cigarettes is because vaping merely heats up liquid to produce vapour, whereas cigarettes combust and produce smoke. It’s already known that inhaling smoke can be severely detrimental to a person’s lungs and overall health.

If that’s not enough, let us debunk some of the myths that may keep one from trying vaping.

1. “But there’s still nicotine in vaping liquids – doesn’t it cause cancer?”

Because nicotine has been associated with tobacco and cigarettes for so long, it is also associated with lung cancer, which is caused by analog cigarettes or other carcinogenic tobacco products. The truth is, there is no conclusive evidence that nicotine by itself causes any cancer whatsoever. Now with that said, I won’t advocate that nicotine is completely innocent, because in combination with combustible tobacco, it does aggravate the growth of new cells. However, doses of nicotine in vaping liquids are considerably lower and thus poses less of a risk. After a few years of vaping, one may even opt for a zero-nicotine juice.

This is a common misconception that was spread through assumptions and misinformation. Vape devices have the same chance to explode as any other electronic device. Most people carry cellphones without fear when there have been stories of those exploding, as well. Any story about vape devices exploding were likely caused be negligence and poor battery care. As it happens, we have a detailed guide on taking care of your device and battery here: 10 Tips for Vape Battery Care and Safety

Ah, this is the one inescapable myth that vapers cannot get rid of. The popcorn lung story was spun from the time when when popcorn factory workers would develop an irreversible condition called “Popcorn Lung” after years of working in the factory. It was assumed that a flavouring ingredient, called diacetyl, was the cause. A study was attempted on the matter, but in the end, there was no conclusive evidence that the condition was caused by diacetyl at all, but naturally, the general population became wary of it. It’s understandable.

Modern vaping liquids, AvacareVape liquids included, are not made with diacetyl. Some flavourings may contain trace amounts that are almost undetectable how tiny of an amount it is. But here is the kicker: a standard tobacco cigarette contains 750 times the amount of diacetyl that any vaping liquid ever will. It was found that the e-liquid containing the highest amount of diacetyl only contained 239 micrograms, whereas a cigarette contained 20,340 micrograms. There’s no argument here. For more information on this particular subject, see our Popcorn Lung blog article.

There are literally millions of stories of individuals who have completely quit cigarettes thanks to vaping. In fact, there was even an entire study performed with the result of which being that electronic cigarettes should be added to the list of primary modalities for tobacco harm reduction. There have been multiple successful studies done on the same topic, such as this study that successfully linked vaping with smoking cessation. If that still isn’t enough for you, places like the ECIGSSA forum or the other various online vaping communities that exist, will be more than happy to share their stories of their journey of quitting the analogs.

5. “Electronic cigarettes are just as harmful as regular cigarettes.”

Every ex-smoker-turned-vaper will tell you how much their stamina, breathing, and overall health has improved ever since making the switch. There is also an incredible amount of evidence that proves how much safer vaping is. Here is a study that proves that smokers who had switched to vaping experienced better blood flow and improved cardiac function. Here is another study that found that smokers whom had switched to vaping had considerably lower levels of toxins in their body. The list goes on.

Definitely not! Electronic cigarettes produce vapor as a result of heated liquid. It’s about as harmful as inhaling the vapour of boiling water. Cigarettes produce smoke through the combustion of a burnable substance. This is almost equivalent to inhaling the smoke of a raging fire, which we already know is extremely harmful. It’s already been shown that second hand vapour is harmless to bystanders. Vaping360.com also posted a detailed article on the subject of secondhand vapour.